History of the Nashua Millyard and the Cotton Mill - Page 5

The steady growth of the company continued in the 1940s. In 1940 the laboratory in the rooftop, monitor story, was enlarged. During World War II the Company ventured into other areas of manufacturing including the production of power resistors for radar, raincoats, ponchos, protective covers against gas, M-14 primer detonators, M-115 bomb fuse adapters, documents for duplicating and ordinance wrap. At the end of the war, all of these products were dropped from production to be replaced by new items including heat seals, flat gummed papers, heat sensitive chart papers and corrugated tape. In March 1946 the company announced plans to construct a new five-story, 100,000 square foot factory on the south side of the railroad tracks for manufacturing and storage. A bridge connected the third floor of the new building to the second story of the Franklin Street factory to permit the ready handling of materials and supplies from one building to the other. Like the 1937 addition, it was constructed by the Morton C. Tuttle Company of Boston. 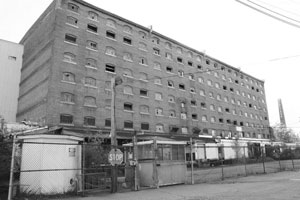 In the late 1940s, the leadership of the Nashua Gummed & Coated Paper Company was instrumental in local economic development efforts after the decline of the textile industry and Nashua Manufacturing Company ultimately led to the departure of Textron, the successor firm. The Nashua-NH Foundation (the non-profit corporation established to acquire the holdings of the former Nashua Manufacturing Company) was formed with capital from seven local banks and businesses including Nashua Gummed & Coated Paper. In 1949 the company purchased the former North Storehouse of the Nashua Manufacturing Company (30 Front Street). The concrete block storage buildings at 31 and 33 Front Street and the metal storage shed behind 31 Front Street were acquired in 1950. In 1952 the company was renamed the Nashua Corporation (also known as Nashua Corp.).

The 1960s marked a period of expansion for Nashua Corp. as it acquired a number of smaller companies including Gubelman Chart Co. (1961), Copycat Corp. (1962), Copycat Ltd. of England (1963) and Paramount Paper Products of Omaha, Nebraska. In Nashua, a motor freight building (36 Front Street) was added to the factory complex in 1962 and a large addition was constructed at the west end of the mill at 25 Front Street in 1967. In 1967 Nashua Corp.'s common stock was traded for the first time on the New York Stock Exchange. In 1969 a new facility for coated paper products was constructed in Merrimack and a technology center office building was constructed at 55 Franklin Street in Nashua.