History of the Nashua Millyard and the Cotton Mill - Page 2 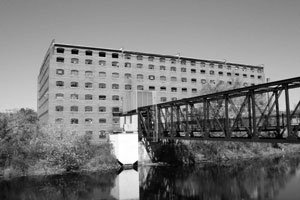 In 1889 Nashua native and capitalist Harry G. Bixby secured control of the business and built the beginnings of the Franklin Street plant. In 1897 Judge Parker's History of Nashua, N.H. boasted it was "the largest and most perfectly equipped plant of its kind in the world". The new mill had a frontage of 315 feet on Franklin Street and was three stories in height with basement. The south elevation was four stories high with basement and the Front Street end was 100 feet deep. Projecting from the south side was a three-story, 40' x 80' annex. It was designed by architect W.B. Page of Clinton, Massachusetts and no expense was spared. The building's castle-like walls were topped by an ornamental crenellated battlement two and a half feet high that extended around the top of the entire building. The windows were filled with hammered glass from England. C.W. Stevens had the contract for the foundation and Smith & Lakeman were the brick masons. Ashley & Lund were the contractors for all the carpentry work. As originally configured, offices and the shipping department were located on the first floor of the Front Street end. The remainder of the first floor consisted of a 251' x 63' finishing room where flint glazing, friction glazing and embossing took place. The second floor of the mill contained the coloring machines and was used for drying the paper. A small area at the southwest corner contained a room for mixing colors. On the third floor were the sheet coloring machines, hand pasting and hand coloring functions. The basement was devoted to machinery and storage. All of the coating processes in the new factory were done on machines and nearly all of the products including card board, pasted bristols, etc. were manufactured in rolls. Modern drying equipment had not yet been invented, so that the stock passed on driers, extending from the basement to the roof, after it was pasted. The three-story annex was used for machine web pasting and hand pasting. Each level of the building was equipped with automatic sprinklers and steam heat, lit by incandescent lights and had its own toilet room. The original chimney was 112 feet high and located on the south side of the building, 80 feet from the Front Street end. It measured 9' x 8' at the base and five feet at the top with an ornamental copper cap. Construction of the building employed an average of fifty men and consumed approximately 1.2 million bricks. When completed, the building was to contain more than one hundred workers.