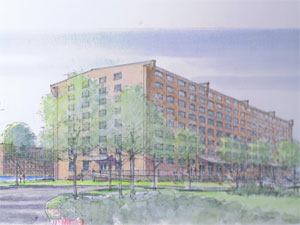 Cotton Mill represent a major milestone in the evolution of downtown Nashua. For years, the Front Street area along the Nashua River has been one of the most desirable redevelopment areas in town.

Cotton Mill is an exciting project that has transformed this beautiful historic site along the Nashua River into a vibrant residential community that will serve as a catalyst for continued positive redevelopment in the area.

History of the Nashua Millyard and the Cotton Mill 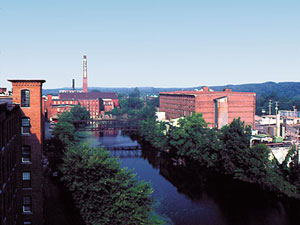 The growth of Nashua over the past two centuries owes much to its industrial development. In the early 19th century industrial development was made possible by a combination of water power and water transportation access and centered on the Nashua Manufacturing Company which was incorporated in 1823 for the manufacture of cotton goods. Over the years, textile mills provided a solid economic base for the local economy and in turn stimulated other types of manufacturing. The construction of the Nashua and Lowell Railroad in 1838 was followed by additional lines from Concord, Worcester, Wilton and Portland. In the 1870s and 1880s textile manufacturing declined somewhat in importance to the local economy as a number of new industries established themselves near the railroads.